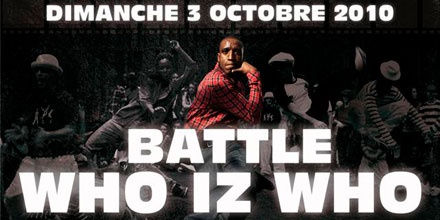 Nike athlete Kymberlee Jay will host alongside Youval at the annual Who Iz Who Battle, Paris on 3 October 2010.

Who Iz Who 2010 will be its fourth celebration of acclaimed battles dedicated to dance. 4,000 spectators from the four corners of the world that will be attending to support 28 of the best international dancers selected from more than 600 from the US, Europe, Brazil, Chile, India, South Africa Korea, China and more.

Nike athlete Kymberlee Jay will host alongside Youval at the annual Who Iz Who Battle, Paris on 3 October 2010.

The action will be broken up with showcases from Secrets of Moonwalk, Serial Stepperz, Philemon and a waacking set from Sonia Soulshine & Co.

The international judges have worked with some of the biggest names in dance such as Michael Jackson, Madonna, Usher, Britney Spears, Janet Jackson, American’s Top Model, and boast movie creditss for Rize.