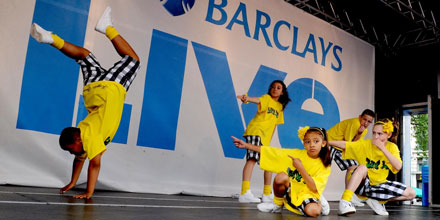 Nicola Steward, choreographer for Dem lot, said: “I can’t believe we’ve won! To have beat off such stiff competition and well known acts is incredible and I’m really proud of the kids, they’ll take huge confidence from this.”

The group win VIP tickets to see Brendan Cole and also won a cheque for £1,000.

The finalists were chosen by a panel of judges including Strictly Come Dancing’s Brendan Cole, Kiss 100 DJ Manny Norté and Lionel Johnson from Barclays. They join Birmingham winners, Steadiflux as regional winners.

Brendan Cole said: “Congratulations to Dem Lot for winning the Barclays Live London heat. All five of them have a huge amount of talent for such young dancers and definitely have a great future ahead of them.”

Videos of the five finalists were then uploaded onto the Barclays Live website www.barclayslive.com where they faced the public vote to decide on the winner. The other finalists were Definitives, Retaliation, Fusion and Remix.

The Funkstylerz launched Barclays Live in June and the campaign was also welcomed with the introduction of its Your Name In Dance online viral featuring Brooke Milliner, allowing people to see their name danced out in a personalised video.

The next winners due to be announced are for the Bristol heat.