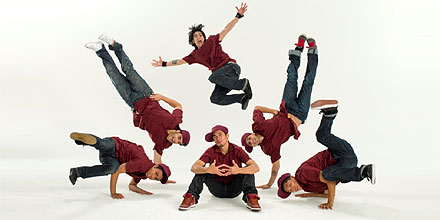 Randy Jackson Presents: America’s Best Dance Crew is back for a fifth season every Sunday night at 7pm on MTV! After four spectacular seasons, the new crews are ready to step up to the plate with some amazing skills and fresh moves.

We traveled all across the U.S. to find the country’s 15 most talented groups, and they’ll be putting everything on the line as they fight for the title of ‘America’s Best Dance Crew.’ The dancers know they must leave it all on the floor and give it their best to impress the judges. Only one team can be the winner, and they all want it.

Mario Lopez returns as the host of the new Dance Crew season as do judges JC Chasez and Lil Mama. Joining the judging crew will be R&B singer Omarion, and together they are all ready to critique each week’s performances in their search for America’s Best Dance Crew.

These fifteen talented and determined dance crews will pop, jump, sway, stomp and step their way to the top. This competition is fierce and they know what’s at stake as they face each other in the ultimate challenge for dance supremacy.

We’ve shaken things up this season with three regional casting specials to start the competition. Each week, five crews will go head-to-head, with only three making it out of their respective region (East, South and West). Starting with episode four, the remaining nine crews will show what they’re made of. Each week, one crew will be eliminated until only the best remain. The winner will be announced during the exciting, live season finale that you will not want to miss.

After the votes are tallied, the two crews with the fewest votes must battle it out on the dance floor in order to get the chance to advance to the next round. One by one, the groups will be sent home, and in the end, only one group will be able to call themselves America’s Best Dance Crew.