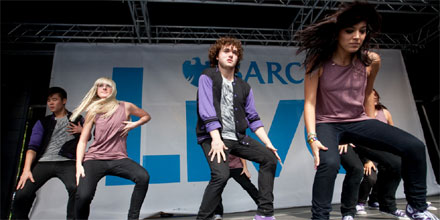 Manchester dance group Precise Crew have been crowned winners of Barclays Live Manchester after wowing a panel of celebrity judges at Piccadilly Gardens.

Videos of the five finalists were uploaded onto the Barclays Live website where they faced a public vote against House of Fierce, Dance Design, Scarlette Vye-Lowerie and Shockarellas.

Precise Crew choreographer, Laura-Anne Gill, said: “We are so happy to have won Barclays Live Manchester and want to thank everyone who took the time to vote for us! The voting was incredibly close between us and the Shockarellas as they’re super talented and we have huge respect for them.”

Precise Crew was formed two years ago by choreographer, Laura Anne Gill who has worked with such names as Alexandra Burke, JLS, Gwen Stefani, Kanye West, George Michael, Pink and Katy Perry. As well as winning Barclays Live Manchester, the troupe recently made it to the World Street Dance Championship Finals.

Brendan Cole said: “Congratulations to Precise Crew for winning the Barclays Live Manchester heat. Precise Crew have a huge amount of talent for such young dancers and definitely have a great future ahead of them.”