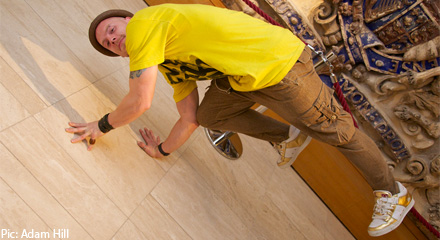 Lex Milczarek, also known as Boogie from Streetdance 3D, was in attendance at an anti drugs event at the Guildhall in London recently to lend his support to the European Commission’s European Action on Drugs campaign.

Lex was showing his support on behalf of the charity Stop Using Me who were one of the speakers at the event, and took to the podium to share his message with delegates. Stop Using Me is a London-based organisation dedicated to preventing innocent individuals being used for drug trafficking.

“This is a really great event for raising awareness about drugs. I know young people get educated at school about drugs, but not on such a level as this,” said Lex. “You don’t tend to get the full story and learn about all of the serious implications.”

The European Action on Drugs campaign is run by the European Commission aimed at engaging individuals and organisations in raising awareness about drug issues in their own environment and discussing effective action.

He continued: “A lot of people say ‘it wont happen to me’ and that ignorance is bliss. But if anyone found themselves in a difficult situation then they would be amazingly grateful to know that campaigns like this are doing great things to help.”

#European Action on Drugs #Lex Milczarek #Stop Using Me #Streetdance 3D
Previous Post
Flawless how to DVD renamed to Flawless: Chase The Dream – Live and Access All Areas
Next Post
Bruk Out rebrands as The Movement Factory with help from Pineapple Studios founder Debbie Moore