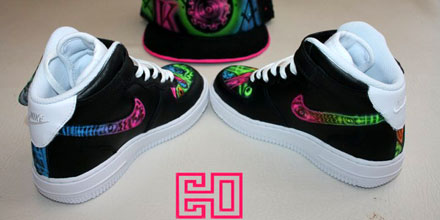 Eccentric O was commissioned to design Akai and Chris and Wes’ costumes for their performances on the Got to Dance semi finals on Sky One last Sunday.

Got to Dance customised outfits – Chris & Wes and Akai 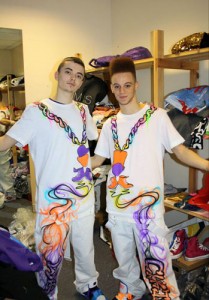 Eccentric O, run by Omar Ahmed, a Milton Keynes based artist and designer, customised Akai‘s trainers, jacket and hat as well as the outfits for Chris and Wes.

Ahmed was also the designer behind Akai’s outfits after he won the TV dance competition in 2010, approached by Akai’s parents after they saw the customisations for Orpington street dancers, Class Crew.

“The producers of Got To Dance saw the outfits I had designed and approached me to design outfits for the live show,” said Ahmed. “When presenting the outfits at Pinewood Studios [where the live shows are recorded], they were more than pleased with the outcome.”

Eccentric O has also been approached to customise outfits for another dance film soon to be filmed.

Video: Chris and Wes Got to Dance semi final performance

Eccentric O will be designing Akai’s official clothing collection, due to be announced this week.

Chris and Wes‘ customised Got to Dance outfit by Eccentric O – click to view full size.