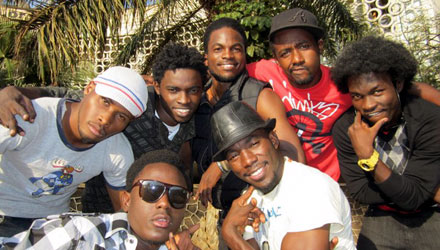 A b-boy crew Tabu Flo from Kampala, Uganda is to debut an extract of its documentary, Night Dancers, as part of Breakin’ Convention film night programme.

The b-boy crew, who met through Breakdance Project Uganda, a non-profit organization which uses breaking (breakdance) and other elements of hip hop to promote social change and social responsibility, worked with Breakin’ Convention artistic director Jonzi D on a dance piece of the same title, Myth of the Night Dancers, based on a popular Ugandan story.

The documentary will chart their trip from Kampala to London leading up to their performance at Breakin’ Convention 2011.

The Night Dancers documentary is being produced by Still Films and directed by Emile Dinneen who hope to raise £3,600 in order to fund production costs for the documentary. The company is accepting donations via the Night Dancer’s Buzzbnk page.