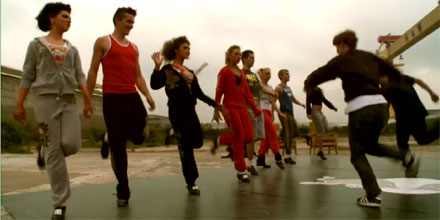 Floorgangz and a traditional Ceili Irish dance group took part in a showcase battle ahead of Red Bull BC One UK at Ulster Hall, Belfast on Sunday.

With the arrival of the worlds best b-boys (breakdancers) to Belfast for the European qualifiers of the Red Bull BC One World Championships, an opportunity for a dance-off with a twist presented itself: A group of traditional Irish dancers challenged the Floorgangz b-boy crew to a dance off under the iconic backdrop of the giant H&W cranes in Belfast city.

After a brief rehearsal to a specially commissioned piece of music, the two crews battled to demonstrate the skills of their respective dance styles. What transpired was a unique dance collaboration as each group learnt from the other. The usually rigidly upright Irish dancers relaxed their frames and as opposed to their traditional uniform donned their street clothes. Similarly, the uber-relaxed b-boy crew walked away with an increased dance vocabulary.

Red Bull BC One is the most prestigious one on one b-boy battle events. Around 1,200 spectators attended Sunday’s event where B-Boy Armstrong became the Red Bull BC One Ireland Cypher champion. He will go on to represent Ireland at the European qualifying round in Barcelona in July.