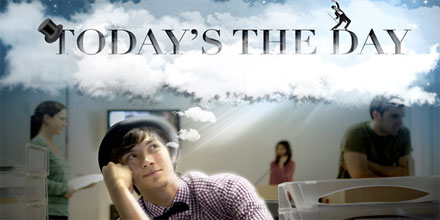 Daniel ‘Cloud’ Campos has successfully managed to raise over $25,000 in funding from investors online to create a promo for his self written dance movie Today’s The Day.

The funding initiative using the website Kickstarter allows investors to buy small luxuries relating to the film, ranging from a free download of the film, a dance video by Cloud dedicated to the backer, up to executive producer credits. The currenty total at time of publishing suprassing $33,000 dollars worth of pledges with four weeks remaining until the funding deadline.

The promotional short for Today’s The Day will be a spin off of the planned feature length dance musical written by Cloud and his partner Tamara Levinson, who is also a dancer, telling the story of a teenager that works at a fictional talent agency, Star Talent, with a dream to dance, even though technically he isn’t very good.

“I believe in this short film 1000 per cent. I believe this short will open the doors to getting our feature film made and when that happens, I believe that it will leave a mark in film history,” said Cloud in his video pitch. “I believe it will be a film that you’ll re-watch from time to time to put a smile on your face or lift your spirits.”

The short will then be pitched to movie executives and to film festivals to gain an interest and backing from film studios in order to gain a wider interest.

Referencing dancers such as Gene Kelly and Fred Astaire, and other iconic dancers from the golden era of musicals, Cloud’s dance film will deliver a message about insecurity, confidence, and courage.

He continued: “Today’s The Day is a light, warm-hearted, feel good film, that in my opinion, is so needed today. The world loves song and dance, so where did the musical go? Help me bring it back!”

Daniel Campos, or B-Boy Cloud, is a dancer from American b-boy crew Skill Methodz that made his breakthrough into commercial dance when he started touring with Madonna in 2004, more recently starring as Kid Darkness in Step Up 3D and in the online dance series The LXD as The Illister.

More recently he has been known for his work as a videographer, creating a series of dance-inspired online videos such as The Music Box and Like Mike.

Earlier today the total passed the $25,000 target. You can view B-Boy Cloud’s reactions below

Daniel Cloud Campos reacts to Today’s the Day on Twitter

Woke up this morning to find that people are still donating to our project!!! This is unreal! It’s going to be that much better now!! Thk u!

@allstreetdance thank you so much!!