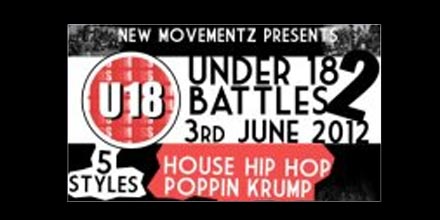 New Movementz Under 18s street dance battle held in East London has received recognition from Big Dance 2012 and has been incorporated into the Big Dance East initiative.

New Movementz Under 18s Battles Round 2 will take place at Stratford Circus on Sunday 3 June between 11am – 8pm in the categories of hip hop, house, popping, krump and breaking, following a successful launch event in January.

Tickets are £6 for spectators and £4 competitors to battle. Battles will take place from 12pm until 6pm with a jam from 6pm to 8pm.

To warm up for the dance battle event Maryland Studioz will also include a series of workshops from the judges on Saturday 2 June:

Big Dance 2012 will be the UK’s biggest celebration of dance led by the Greater London Authority, Arts Council England and Foundation for Community Dance. The programme is part of the London 2012 Festival, the culmination of the Cultural Olympiad.

East London Dance has been leading Big Dance in East London since it launched in 2006, and for 2012 is planning a series of exciting outdoor dance events to celebrate the people and places of East London. Details can be found at EastLondonDance.org