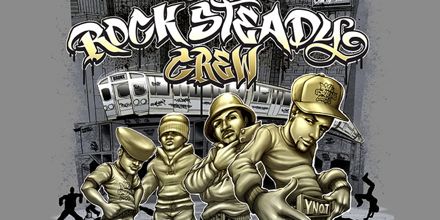 Crazy Legs is to retire from battling at the Rock Steady Crew 35 Year Anniversary on 28 July 2012 in New York – after battling everyone at the party.

Crazy Legs announced he was to retire from battling to a British audience at the UK B-Boy Championships in October 2011 with plans to get into shape over the next nine months ahead of his retirement.

Crazy Legs recently wrote an entry on his website, CrazyLegsWorkshops.com, about his excitement.

“I’ve been training for five months now and as each day passes I feel more anticipation and a greater sense of urgency. Every thought running through my head is about what that day will be like,” he wrote.

In that time, and in his latest video update on 24 July (below), Crazy Legs admitted to losing 20 pounds in weight through training regularly and getting in shape for his final battles.

“All I feel right now is an amazing sense of hype, a crazy sense of adrenaline, anticipation, nervousness,” he said in his last video update. “I have absolutely no problem with nervousness. I actually crave it, I crave fear before a battle. I use fear for a battle: Fear is my ally in a battle.”

Crazy Legs reiterates in the six minute video that his ‘retirement’ is in no way an end to his involvement in hip hop or b-boying and he will continue to teach workshops and do performances.

He continued: “As far as the battle scene is concerned I’ve always wanted to have the opportunity to go out in my own way. Because of the injuries I’ve had over the past several years […] it’s put a damper on that and left me with a crazy, empty feeling of not having that finality to my b-boy life.”

Crazy Legs is an original member and current president of the Rock Steady Crew, the world’s most recognised b-boy crew who also starred in the movies Beat Street, Wild Style, Style Wars and even released their own album including the anthemic single (Hey You) Rocksteady Crew. More history on the Rock Steady Crew can be found on his website.

Video: Interview with Crazy Legs – In The Scene (Vimeo)