New Year Resolutions for 2013 from All Street Dance readers 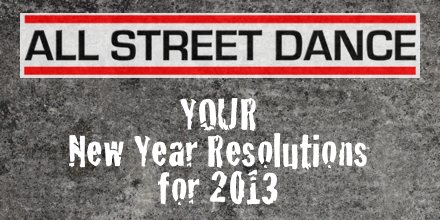 All Street Dance has collected a list of  New Year Resolutions for 2013 from its followers on Twitter to see who sticks to theirs next year!

The New Year Resolutions have been collected and embedded below which will remain online until we revisit them to see whether or not everyone has stuck to theirs. Expect us to check up on you in a few months!

The tweets below include those hashtagged under our tag #NewYearDANCEResolution and responses to our tweets ahead of the new year 2012/2013. If you’ve been notified of a mention via Twitter don’t forget to Find us on Facebook too! If you see your tweet below don’t forget to share this on your wall so others can participate too!

Note: In order to see the embedded tweets you’ll need JavaScript enabled (which means it may not work on all mobiles / tablets / browsers!). Either visit us on a PC or click here to read all the tweets on Storify where they’ve been saved.

New Year resolutions for followers of All Street Dance. We kicked off the #NewYearDANCEResolution – are you included below?