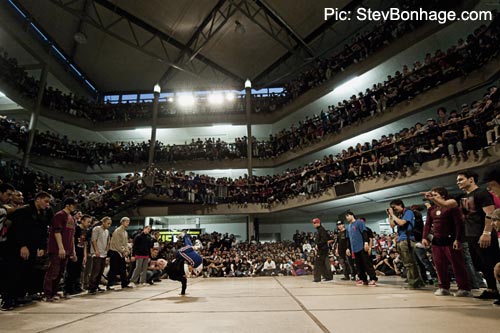 The Notorious IBE has been cancelled according to the organisers of the annual international b-boy festival that takes place in Heerlen, Netherlands.

It was announced in a statement today on the Notorious IBE’s Facebook page that: “It is with great sadness to report to the international Hip Hop dance community that the involved responsible parties are unable to stage The Notorious IBE this year.”

The short statement continued: “At this moment IBE’s future is undecided but we hope to save this great event in any way we can.”

Founded in 1998 the event brings in over 10,000 hip hop dancers for its b-boy, locking, popping and tricking events, battles and showcases. In the past the Notorious IBE took a two year break from 2006 moving from its original location of Rotterdam to the city of Heerlen in 2008 which owns the IBE event, which is also backed by a lengthy list of sponsors and partners.

The Notorious IBE 2013 would have been the 13th festival in the series.

How do you feel about IBE being (apparently) cancelled? Leave a comment below or tweet us your thoughts to @allstreetdance