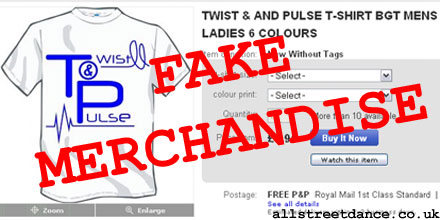 No less than a week after the final episode of Britain’s Got Talent aired on ITV1, counterfeit Twist and Pulse t-shirts have started appearing on online listings.

Fake collectibles are being auctioned on eBay allowing bidders to buy personalised memorabilia such as mugs, magnets and T-shirts bearing the dancer’s faces and logo to commemorate their progress.

Twist and Pulse collectively own the rights to their logo and will be filing an intellectual property infringement claim on eBay.

Although counterfeit Britain’s Got Talent memorabilia is widely available on eBay sporting “I Support [Act’s Name]” slogans for fans to show their support, Twist and Pulse appear to be the popular commodity – stock even includes branded bookmarks.

Official merchandise from Twist and Pulse is due to be announced in the future and will be sold through their official website.