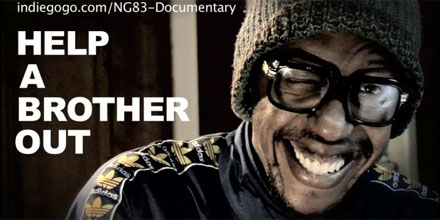 In a bid to raise money to license original music for forthcoming breakdance (b-boy) documentary, the producers of NG83 are to sell production credits.

In exchange for donations the producers are giving away the titles of executive producer, associate producer, and NG83 merchandise for smaller contributions.

Donations can be made via the NG83 IndieGoGo page.

NG83 is an independent documentary produced by Donkey Stone Films, in partnership with Futurist Films and in association with Fourmost Films focusing on the b-boy scene in the 1980s.

Focusing on the peak of the Nottingham and surrounding city b-boy scenes, it features interviews with the original b-boys and previously unseen footage of battles and television appearances.

So far NG83 has been part-financed through EM Media to clear rights of original TV broadcasts and is keen to secure authentic music for the soundtrack.

Last week a fundraiser was held for NG83 at the Saturday Afternoon Jam reunion at Rock City in Nottingham.