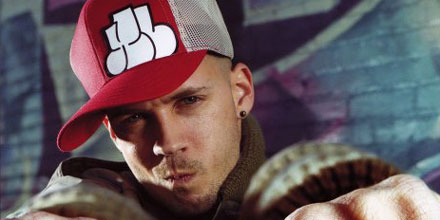 Easy Roc has announced he is resigning from the Rock Steady Crew after 18 years according to a statement posted online.

The reasons behind his departure include feuds between present Rock Steady Crew president, Crazy Legs, and “mismanagement and poor leadership, or lack there of.”

According to the statement the eventual fall out came as a result of a disagreement via text message over concern for Rock Steady Crew member, Masami, who resides in Japan after the earthquake struck.

No statement from Crazy Legs has been released at time of publishing.

Easy Roc’s full statement can be found below.

Dear family, friends, fans, supporters or just anyone who cares, after over 18yrs involvement with the Rock Steady Crew I am finally calling it quits. I can no longer stand by and watch it’s mismanagement and poor leadership, or lack there of, drag it down into the dirt.

This decision has been a long time coming, over the last decade I’d say. But I’ve always bounced back, determined to keep representing this crew in the way that I, and a few of my crewmates thought it should be done. Sorry to say that we were blinded by the honor that we felt for even being a part of such a prestigious organization. But the realities have finally broken down my pride and reduced it to shame.

Rock Steady has always been plagued by feuds, jealously, bickering, you name it. This is to be expected when you take people from different cities, states, countries, backgrounds, beliefs, ages and ethnicities and put them in a situation where they’re supposed to act like a family. This is a hard thing to make work. Real crews take time to grow, build and develop. Mix this with a revolving door of members every few years or even months and you’ve got one big headache. Now top it off with the fact that it’s not a democracy!

Yes the crew has been ran solely by the same person (we all know who) for the last 30 years, give or take. That is a really long time don’t you agree? In all this time there has never been an established (in writing) set of rules, laws, guidelines, goals, or code of conduct to follow. As a result, it’s leader is allowed to do as he pleases, making up the rules and changing them depending on his mood.

We call this a dictatorship and I am no longer interested in being a part of it. Sure there are some other Old School Veterans involved but with no real power, just advisors. Of course they’re all going to be pretty unhappy to hear what I have to say but I assure everyone including them, that I mean no disrespect to anyone.

I’m simply stating my feelings and observations based on first hand experience. You can choose to consider the facts or simply dismiss this as my opinion. To start off, I have absolute respect and admiration for, O.K. I’ll have to say his name, Crazy Legs, as one of the greatest persons to come out of the Hip-Hop movement. A true inspiration to many around to globe including myself.

But now with that being said, I can finally say that I’ve found his ability to manage a crew of this size, caliber and diversity to be at most times sloppy, erratic, unorganized, unclear, unfair and unjust. He makes spontaneous decisions based on his personal feelings and not on what’s best for the crew or with the regard for facts or majority consensus. He plays favorites with some while distancing others, usually those with bold ideas, strong voices and noble intentions. For many who bump heads with him it simply means the boot. Believe me in 18 years I’ve seen it happen over and over again and again. Don’t ask me how I’ve managed to stay in this long. Not out of lack of defiance. I’ve had many a heated word with the man but I’ve always tried to come back to the reasons why I wanted to be in this crew from the start. I really believe in what Rock Steady stands for, the purest version of the B-Boy dance, philosophy, style and feeling. The essence! Sure other crews possess it but come on…Rock Steady Crew?

It was a chance to be part of history, and for that I am most satisfied. But it was also a curse. I have experienced probably more pain than pleasure being a member of RSC. Some physical but mostly emotional and psychological. Perhaps that’s what kept me going, the thought that every righteous cause comes with it’s pain and suffering. And that some how in the end there is a glorious reward. But that is not the reality I have come to find.

Getting to what finally led me to make this monumental decision was the most recent offense that C L had made, in which, irritated with many of the crew members’ inability to work together or get along, he decided it best to just kick everyone out of the crew. This was not the first time he had done this but it was the first time he had done it through a very impersonal ‘mass text’. Now myself and several other Senior members did not receive this text nor were we considered to be part of the excommunication. One of the perks of being elderly I suppose, out of sight out of mind. But realistically, we are simply not as involved in the day to day events as the newer recruits.

Many of the shocked members desperately tried to reach Legs to find out what was going on and to figure out some way to hang on to their RSC status. Of course he was un-attainable. After many days of this he slowly started to answer certain peoples calls and texts, including mine. “Oh Easy, you know this is just the method to my madness”, he said to me.

You have to understand that Legs is an expert at manipulation, a Pro at trivializing, and an all out Master of excuses and reasoning. Within the first few minutes of  an argument he’ll have you forgetting the very thing you had been upset with in the beginning. But never once resolving the issue itself.

That is why after 30 years the crew still suffers from the same old BS time and time again. Some of the members who were kicked out were never contacted again. While others, one in particular (who was very controversial), were allowed to rejoin as if nothing had ever happened. Other members were given the chance to come back but declined the offer (way to go chaps!) The least fortunate members were never told why they were out or even given a chance to say their peace. This really bothered me. It was wrong and it was cowardly.

Now for the last few months since this travesty I’ve made several attempts to reach C L in the hopes of sharing my feelings and suggestions in order to help resolve issues and perhaps re-instate some of the members. But my texts and voice messages went un-answered. Nothing new there. He even came to L.A. a couple times but never called to tell me he’d be in town. I’m a grown man, busy with my life and not about to go chasing him around. So, the absolute straw that broke the camels back was this last weekend in which he was coming to town to do a DJ set and who knows what else? Once again I got no call or text, mind you this is our leader who stresses that we all need to communicate with each other, specifically when in each others cities.

It was for this reason I chose not to attend the first nights show. His “favorites” knew he was coming and actually arranged for him to DJ a special event they were doing this same weekend. I guess it slipped their minds to tell old Easy about it. I did get an invite just hours before but only after I sent a rather heated text to one of them while looking for Legs. And these people are supposed to be my crew.

Anyhow I finally, received a very brief text or  shall I say, 6 texts all of which contained 1 or 2 words. You know the kind? I hate those!  They were full of excuses why he had not called that day and so I replied as to why he hadn’t responded in months. I’ll admit my words were not sweet but at this time I was really annoyed. So here comes the most offensive thing this person has ever said to me and the reason why I can no longer stand it……….

Before I tell this I must explain that this drama unfolds a few day’s after the tragic earthquake and tsunami in Japan. We have RSC members in Japan, namely a girl named ‘Masami’ who has been down almost as long as me but whom I haven’t seen in many years and was not even sure if she was still down. I do know she lives in Tokyo and from what I had observed on the news, People in Tokyo were doing O K. So now, in response to my frustration of all this other shit, he texts to me, “Shouldn’t you be more worried about how Masami is doing right now?”  What! Of course I was concerned for all of my friends in Japan and the country as a whole but what the hell did that have to do with the problems of this fucked up crew?

I was so offended that I simply replied “How fucking dare you?” In which his reply was, “Enjoy your life” and “Loose my number”. All of this in text messages mind you. Let’s hear it for technology! Well at least I can save them as proof and a reminder. So there it is. I’m sure people will say, ”Damb, I can’t believe Easy’s just putting this drama out there” but you know what? I don’t give a shit anymore and I think people need to hear the lame B S that goes on in this crew. The stuff that’s not in the history books or in your all too familiar interview on the story of  ‘Crazy Legs & the Rock Steady Crew’.

It took a lot of people, over a lot of time to make this group what it is today. So why one leader, one opinion, one decision maker? Fortunately I will spend no more of my precious time, effort, blood, sweat and tears trying to find out.

Formerly of the ROCK STEADY CREW

The Rock Steady Crew was formed in 1979, originally called The Untouchable Four B-Boys.

Since its initiation the crew has gone through several new generations and reprisals as the crew expanded and started new international chapters, with crew members joining and leaving as different presidents took over.