One Man Walking on Channel 4 brings krumping to Street Season 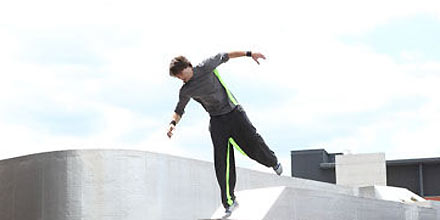 One Man Walking, a dance film made for television, will air on Channel 4 as part of Street Season tonight.

One Man Walking explores some of the intensity and challenges of life in London using krump combined with the excitement and relief of parkour (freerunning).

The dance film was written by Jonzi D and will feature choreography by Kenrick Sandy, a soundtrack composed by Mikey J Asante of Boy Blue Entertainment and parkour from Kie Willis.

One Man Walking was produced by Anne Beresford and directed by Margaret Williams for MJW Productions, well known for her award-winning dance films including four series of 4Dance: Dance 4 Film for Channel 4.

“We’re in London and this is one of the most expressive cities in the world. When you walk down the street everyone is different, everyone has a chance to be themselves,” said Kenrick Sandy, One Man Walking choreographer and dancer.

“One Man Walking is a chance to showcase what London is about. As much as it is sometimes hard to live in London, there is that revolution that pushes us through, expressing ourselves through movement and through dance, through music.”