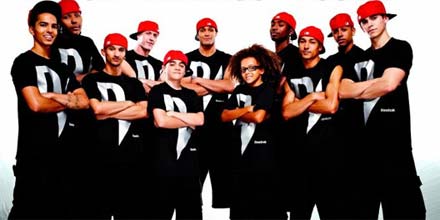 Kevin Bell, store manager at Morrisons in Milton Keynes said: “To have members of Diversity and John Graham perform at the store is amazing and we hope it will bring in the crowds and as much cash as possible for Save the Children’s brilliant work.”

Born to Shine is an entertainment series on ITV1 in collaboration with charity Save the Children, which will be broadcast on Sunday evenings at 8pm over six weeks in July and August. The first episode aired Sunday 17 July and included a performance from Diversity.

Giving the public a chance to get involved in Born to Shine and have a fun family day out, Save the Children is working with Morrisons to take the interactive roadshow around the country.

Children took part in a 30 minute masterclass given by Perri Luc Kiely and Mitchell Craske and choreographer John Graham who has worked with Beyonce, Justin Bieber and Cheryl Cole.

“Our Born to Shine roadshows are a fantastic opportunity for the public to get involved with Save the Children and we are thrilled to be working alongside Morrisons to launch them. We believe that all children are born to shine and we know we’ll see some real talent shining through from across the UK over the next few weeks,” said Justin Forsyth, chief executive of Save the Children.

“So many children around the world don’t get the chance to grow up and fulfil their potential. The celebrities and the child stars in Born to Shine have had that chance, and now they are generously using their talent to support our great cause, raising money to help save children’s lives in the world’s poorest countries and give children here in the UK a better start in life.”

Presented by Save the Children’s ambassador, Natasha Kaplinsky, Born to Shine on ITV1 sees talented youngsters mentor famous faces as they learn a new skill, from tap dancing, to rapping to playing a new musical instrument. Each week three famous names take to the stage and showcase their new skill to the nation, where they are critiqued by a panel of judges. The series will culminate in a fundraising extravaganza for Save the Children featuring live performances from the five finalists and their child mentors.

The next Born to Shine roadshow will take place at Morrisons Queensbury, London on Saturday 20 August.