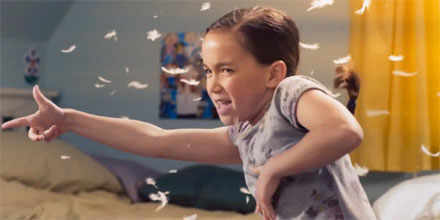 Masters of Motion dancer Arizona snow is the dancer in the Weetabix Minis advert produced by BBH London.

The advert has aired during X-Factor commercial breaks, as well as via online mediums, including a guide to learning the moves and routine with Arizona Snow on the Weetabix YouTube channel.

Dominic Goldman, creative director, said: “It was really important to get an amazing dancer and we scoured the country and saw incredible talent out there, but Arizona just had everything: She was precise, she had rhythm, she brought her own moves along with great choreography.”

Omari Carter, choreographer of the Weetabix Chocolate Spoonsize advert, said: “We had some krump references, looking at some young kids dancing in LA to work with the girls and get a mean quality.”

He continued: “When it came to choreographing for the bears it was quite difficult because it has a very different type of movement. Everything you do in the bears is already 10 times heavier than what you would do in real life, so trying to copy Arizona’s moves in the bears you have to come uy with a different kind of movement.”

Arizona’s dance crew, Masters of Motion, was formed by dance teacher and choreographer Sian Taylor 21, at the end of 2008, made up of ten children aged 10 to 14 years, consisting of eight girls and two boys.