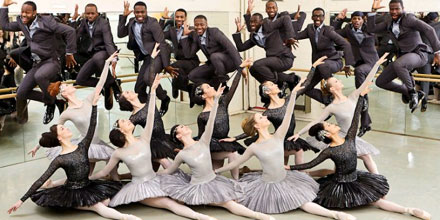 Flawless and the English National Ballet has moved a step closer to the start of their Against Time UK tour this week by previewing the rehearsal process in a recent video posted online.

Since the announcement a synopsis of the plot has also been revealed (below) and tells the story of a battle between the students of The Academy of Excellence and an evil time manipulator who plans to end dance by stopping time.

The Against Time show has been created by Flawless‘ artistic director and lead choreographer Marlon “Swoosh” Wallen and Jenna Lee, soloist and choreographer at English National Ballet.

Flawless and the English National Ballet first performed together at the Peace One Day concert at the O2 in London in September 2011 having been introduced to each other at Buckingham Palace for the event Young people and the performing Arts earlier in May 2011, where they both performed as individual companies.

The story of Against Time follows the battle between the students of The Academy of Excellence and an evil time manipulator who plans to end dance by stopping time. Four of the students discover his journal and realise they have to stop him before it’s too late. In a race against time, the four battle against the odds to uncover the mystery and solve the puzzle…

Flawless was one of the finalists on Britain’s Got Talent in 2009. After placing as runners up, Flawless went on to appear in StreetDance 3D and StreetDance 2 as The Surge and performed a national UK tour of Chase The Dream.

Prior to their success on television and on film, Flawless was champions at Street Dance XXL (then Street Dance Weekender) and later IDO World Champions scoring full marks from all the judges.