Flawless and English National Ballet Against Time reviews round up 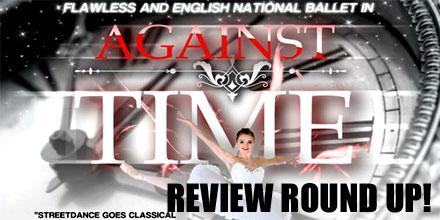 Against Time, a collaboration between street dance crew Flawless and the English National Ballet is currently on tour across the UK.

Below is a selection of reviews for Against Time from British newspapers, magazines, and leading online critics, plus star ratings (where available) and short extracts.

To give a more balanced view, more reviews will be added as they are published across the duration of the tour – follow us on Twitter or like us on Facebook for updates to this article.

If there is a review of Against Time you think we should include, please add it to the comment box below this article for consideration.

Too Much Flavour
This was no Chase the Dream. But like Chase the Dream hopefully it will be tightened up in later shows. I feel street dancers will appreciate it but it won’t enlighten their minds… for the average person, Britain’s Got Talent fan or someone looking for an entertaining evening that isn’t necessarily culturally educative will enjoy this.
Read full review

Guardian (Judith Mackrell) – 2/5
Too much of the material is lazily default, especially the pert and winsome ballet sequences: and the plot, such as it is, is a random jumble of cliches… a truly curious and sustained exploration of these dance forms would have delivered so much more
Read full review

Telegraph (Mark Monahan) 2/5
Created by Flawless‘s leading light Marlon “Swoosh” Wallen and ENB soloist Jenna Lee – turns out to be one of those frustrating shows that one wishes all the best while struggling to get much personal enjoyment out of.
Read full review

Londonist (Laura Dodge)
We’ve seen numerous ballet and contemporary dance performances but this was very different from anything else we’ve experienced. The audience was positively buzzing with cheers ringing out for every impressive move onstage.
Read full review

London Dance (Graham Watts)
Against Time was largely dreary and shamelessly derivative. The ludicrous and incomprehensible plot was a thin veneer of StreetDance The Movie (ballet meets street dance in a school setting) with bits Into the Hoods, Some Like it Hip Hop [Zoonation] and The Most Incredible Thing [Pet Shop Boys/Javier De Frutos] mixed into the cocktail without creating anything remotely new or innovative.
Read full review

Financial Times (Gerald Dowler) 2/5
…Against Time, evokes a powerful sense of déjà vu: the academy setting and burgeoning love between a pair of street and ballet dancers is pure Fame, and there are reminders aplenty of everything from Scooby-Doo to The Rocky Horror Picture Show
Read full review

Now Magazine (Alison Tay)
Tchaikovsky’s Dance Of The Little Swans gets a hip hop remix, and if you ever wanted to see Flawless do pliés and port de bras at the barre, Steady Steadman in a tutu, and the ENB’s corps de ballet give the Pussycat Dolls a run for their money now’s your chance.
Read full review

The story of Against Time follows the battle between the students of The Academy of Excellence and an evil time manipulator who plans to end dance by stopping time. Four of the students discover his journal and realise they have to stop him before it’s too late. In a race against time, the four battle against the odds to uncover the mystery and solve the puzzle…