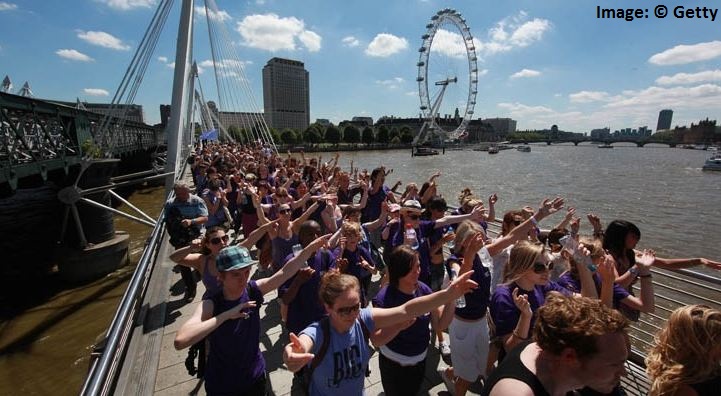 The T-Mobile Big Dance 2010 built to a climax today with the Big World Dance, a grand finale that saw thousands of people transform the streets of London into a giant open air stage.

Thousands of people gathered together to perform the show stopping routine, commissioned by the Southbank Centre and directed by Luca Silvestrini, Artistic Director of Protein Dance.

After starting the dance procession at the Southbank Centre, the dancers made their way across the Golden Jubilee Bridge and up Northumberland Avenue into Trafalgar Square for a spectacular performance on a gigantic scale. The dance was performed to a specially created soundtrack played live in Trafalgar Square by DJ Walde. 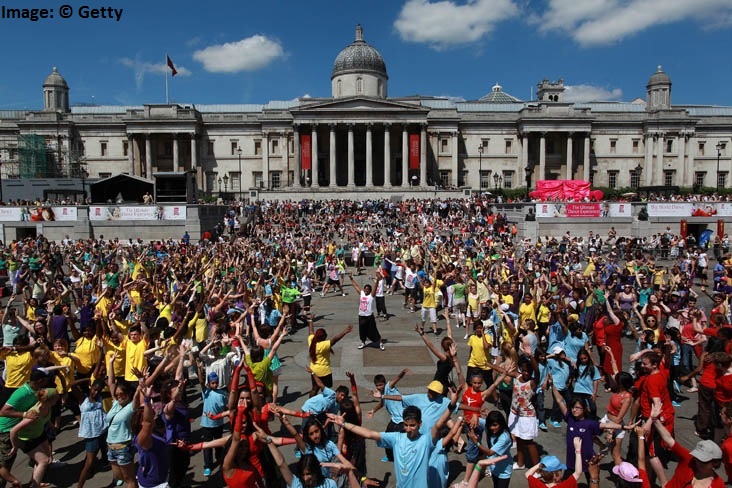 The choreography for the Big World Dance was taught to thousands of people in free workshops across the city and the routines were also learnt online. Everyone was encouraged to sign up and take part, and participants could learn one of five different versions of the dance organised by the five hub partners – East London Dance, English National Ballet, Greenwich Dance, Sadler’s Wells, and Siobhan Davies Dance.

The Mayor of London Boris Johnson said: “The past week has once again underlined the extraordinary power of dance. With thousands upon thousands of Londoners – of all shapes and sizes, ages and abilities – taking part, Big Dance has been a footstomping, toe-tapping, highkicking triumph.”

To end the summer’s events, a selection of lucky Londoners were treated to a special screening of Dirty Dancing in Trafalgar Square to celebrate T-Mobile’s Night In customer loyalty offer.

Stars of the Dirty Dancing musical where on hand to teach Londoners dance moves from the show to close T-Mobile Big Dance 2010. Tina Cleary, Senior Brand Experience Manager for T-Mobile explains: “Today’s dance has been the perfect finale to T-Mobile’s Big Dance 2010, we’ve been absolutely delighted to see how infectious dance is inspiring thousands of Londoners to get up and have some fun. To celebrate the end of Big Dance 2010 and the launch of our Night In offer, we wanted to create the perfect dance film screening right here in the Capital, and what better dance movie to show than Dirty Dancing.”

Big Dance is funded by Legacy Trust UK, an independent charity set up to create a cultural and sporting legacy from the London 2012 Olympic and Paralympic Games.