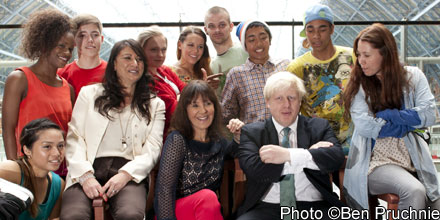 The day of dance will include 150 dancers from around the UK led by Kate Prince, choreographer of West End street dance shows Some Like it Hip Hop and Into the Hoods and will be inaugurated by the Mayor of London.

The Big Dance Week launch at St Pancras International starts at 8.30am and will include speeches by the Mayor of London Boris Johnson and choreographer Arlene Phillips at 9.30am, continuing throughout the day on stages around the station concourse until 7pm.

At 6.30pm there will be a Big Dance finale which everyone is invited to join in by learning the choreography online with the option of a run through at 4.30pm at the station.

Big Dance 2012 is one of the largest mass participation events in the London 2012 Festival programme following the success of Big World Dance in 2010 where thousands of people turned up to perform at Trafalgar Square.

With the aim to get five million people across the UK dancing during Big Dance week, which runs from 5 -17 July hundreds of free events will be taking place in London during the week in venues ranging from public squares and shopping centres, to parks, playgrounds, bridges, studios and swimming pools.

The 2012 grande finale will be a dance directed by choreographer Wayne McGregor and choreographed by the 1,000 people taking part in Trafalgar Square on Saturday 14 July.

Kate Prince has also been commissioned by Channel 4 and BAFTA. The Holloway Laundrette will be directed by Felix Harrison and Kate Prince starring Natasha Gooden and Robert Anker. Produced by Tom Booth for Contented Productions it will broadcast on Channel 4 between 7 – 15 July.