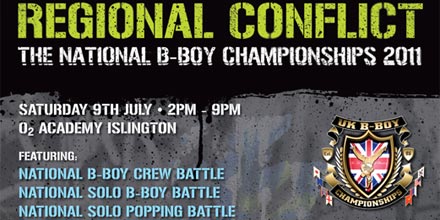 B-Boy Lilou, B-Boy Mouse and B-Boy Just Do It will judge the b-boy solo and crew battles at the O2 Islington Academy on 9 July.

Currently Lilou and Just Do It are involved in Streetdance 2. Recently Mouse has been involved in judging qualifiers for international battles including Red Bull BC One cyphers.

30 crews which consists of northern and southern contenders have entered the Regional Conflict in a bid to be national champions  – this year’s UK B-Boy Championships will not consist of local qualifiers.

The winning soloists and crews will qualify for the finals at the Brixton Academy in October. The 2010 southern qualifiers winners were won by Trinity Warriors.

Additional entrants for battles can be made by emailing battle@regionalconflict.com

Tickets for Regional Conflict can be bought via TicketWeb.