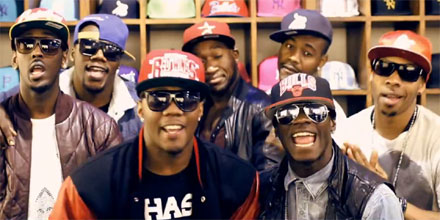 Flawless has released Hustle Hard (Refix) a music video featuring members of the dance group rapping and singing to a remix of Ace Hood’s single of the same name.

Last week Flawless released a video teaser of the Hustle Hard song on their YouTube announcing the forthcoming video that would showcase the dance group in a different light and showcase their other talents.

The music video, produced by It’s Upshot also includes vignette footage of Flawless’ biggest performances including their nationwide Chase the Dream tour and starring in StreetDance 3D as The Surge.

“Fans of Flawless are in for a surprise,” said Marlon ‘Swoosh’ Wallen, director of Flawless Entertainment in the official video release. “Just when you thought Flawless were just known for their exceptional dance skills they have other hidden talents and are now bringing you fresh lyrical raps and without a doubt they are going HARD!”

The video has been released after the news that Flawless and English National Ballet are to collaborate for the new show Time Is Of The Essence in June 2012.

Flawless will also reappear as The Surge in StreetDance 2 next year.

Flawless’ Hustle Hard (Refix) video appears to be for promotional purposes only and is not available to download or buy at present.

#Flawless #Hustle Hard The Refix #It's Upshot #Marlon Wallen #The Surge
Previous Post
Cypher Styles to give away free bboy gear to an entire dance crew for Christmas
Next Post
Jump Off street dance battles return to Fabric London with £10,000 prize for winning crew