George Sampson and Twist and Pulse star in Christmas pantomimes 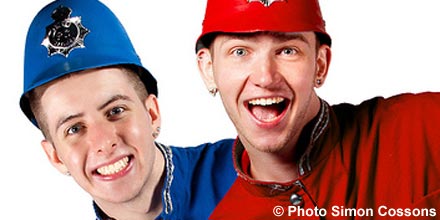 George Sampson and Twist and Pulse have both recently accepted roles in pantomime productions, it has been revealed recently.

George Sampson is to star in a lead role as Peter Pan in The Pantomime Adventures of Peter Pan at the at the Derby Assembly Rooms, next to former Eastenders actor Larry Lamb as Captain Hook.

Peter Ireson, director of Derby Live, told the Derby Telegraph: “Securing George Sampson to play the part of Peter Pan is a real coup for us and along with Larry Lamb gives the Assembly Rooms’ pantomime one of the finest line-ups in the UK with something for all generations of the family.”

George Sampson is billed as bringing “a fresh and contemporary take to the iconic J M Barrie character” and will give Peter Pan a “streetwise, urban charm.”

“George is set to thrill yet more audiences by appearing on stage at the Assembly Rooms this Christmas – we all know Peter Pan’s flying is spectacular, just wait till he dances!” Peter Ireson continued.

George Sampson has performed on stage in ZooNation‘s Into the Hoods, appearing as one of the Lost Boys, later going on to appear a Kyle Stack on BBC drama Waterloo Road and in the movies in Street Dance and Street Dance 2.

Twist and Pulse are to star in Aladdin as the roles of Chinese Police at the Sevenoaks Theatre in Kent next to lead role Shane Lynch from Boyzone as the villain Abanazar and Tony Haygarth from Emmerdale.

Twist and Pulse appeared on Britain’s Got Talent in 2010 showcasing their ‘Streetomedy‘ dance style, later touring with X-Factor duo Jedward.