B.Supreme vs Dare 2 Dance: Battle of the Boroughs 2012 line up – Bloomsbury Theatre London 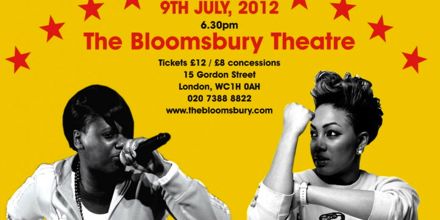 The line up for b.supreme vs Dare 2 Dance: Battle of the Boroughs at the Bloomsbury Theatre, London, which returns on Monday 9 July 2012 has been announced.

The dance battle and showcase event features London-based female dance company performances alongside girls from Lambeth, Sutton, Merton, Haringey, Hillingdon and Waltham Forest schools that have been mentored by b.supreme teachers who will battle to win the title of Dare 2 Dance 2012 Champions.

The showcase of female dance companies includes an international guest appearance from RDS Company from Riverpark Dance School in Bratislava, plus a solo b-girl competition DJed by Donna Dee.

b.supreme vs Dare 2 Dance: Battle of the Boroughs takes place at the Bloomsbury Theatre in London on 9 July 2012 at 6.30pm.
Tickets are available to buy online here.

b.supreme vs Dare 2 Dance: Battle of the Boroughs line up

Dare2Dance (D2D) is a project which aims to engage and empower girls and young women aged between 14 and 24 through the medium of street dance. D2D is a project conceived by independance and developed in conjunction with London Southbank University and Pro Active London. It is funded by The Mayor’s Fund, EMDP and Street Games.

b.supreme is the UK’s festival for women in hip hop, intitially premiering at the Southbank Centre in London. Following the success of its live event, b.supreme opened Studio B in Brixton last year and later commissioned renowned b-boy Storm for b.supreme Europe, an international collaboration held with Battle of the Year, Spin Off and Lezarts-Urbains.

b.supreme is touring in 2013 and presently seeking a sponsor, which can be found on the b.supreme website (linked).