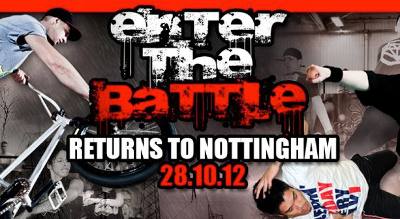 The judges for Enter the Battle 2012, the annual urban sport and dance event has been announced at the Harvey Hadden Sports Complex in Nottingham this October.

Kymberlee Jay will host the street dance battles that will include house, popping and hip hop solos as well as a crew battle where Rhimes LeCointe of Boadicea Crew, Caramel Soldier of Pieces of House, and Kenrick Sandy of Boy Blue Entertainment will judge.

The b-boy competitions held in partnership with battle organisers Dope & Mean and include a seven to smoke, 2-on-2 and all styles crew ‘roulette’ battle judged by B-Boy Lil Jay of Trinity Warriors, B-Boy LB of Floor Riders and B-Boy Diggady of Flava Squad.

It will mark the third year of the Enter the Battle event since it was launched in 2010 at the Indigo2 in London, later moving to the Harvey Hadden Sports Complex in Nottingham last year.

As well as dance competitions the Enter the Battle events include extreme martial arts and tricking, with BMX, slacklining, parkour, live music and other activities for spectators to try out.

Enter the Battle 2012 will take place at the Harvey Hadden Sports Complex in Nottingham on 28 October 2012. Tickets and information are available from enterthebattle.co.uk