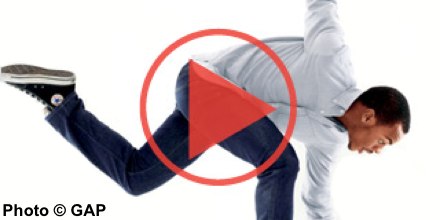 Dancer Lil Buck is a star in the new Gap Jeans advert along with a line up of dancers and musicians that will represent the brand’s autumn season.

“I liked the idea of an internal space where you don’t really have any point of reference. It’s a natural way of doing special effects,” Sutton told Nowness.

In the second film, Black Swan choreographer Benjamin Millepied filmed Lil Buck jooking to a classical soundtrack on the streets of LA.

Lil Buck (Charles Riley) is an American dancer from Memphis, Tennessee in America who dances jooking, a street dance based on gangster walking. He is currently a dancer on Madonna’s MDNA world tour.