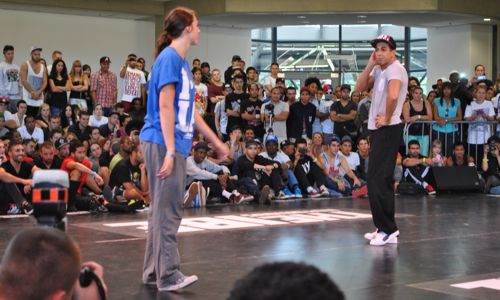 The UK BBoy Championships 2012 European qualifiers took place this weekend at The Notorious IBE in Holland in breaking crew and popping categories for a place in the UK B-Boy Championships world finals in London in October.

Soul Mavericks emerged as winners at in the crew qualifiers, however, since winning the Regional Conflict 2012 UK B-Boy Championships qualifier in London in August their qualifying position was deferred to Dead Prezz of Greece by the judges for being the “best losing crew” (rather than the runners up) along with Original B-Boys from Ukraine and Arcopom of Spain.

They will join the top eight crews in the final including UK national champions Soul Mavericks and R16 UK BBoy Championships 2012 winner Jinjo Crew of Korea.

The two winners of popping were Gator and Salah, both of France, but Salah awarded his qualifying position to the runner up, Sasha, as he felt he had entered the UK B-Boy Championships so many times it was time for someone else to have a chance. Both Sasha and Gator will compete in the popping category at the knock out jam on Saturday 13 October.

Majid won the hip hop battles and will appear as a special guest in the finals.

It is the first time that the UK B-Boy Championships has included a hip hop category in favour of locking. Winners of locking and all other dance battles at IBE 2012 can be found here.