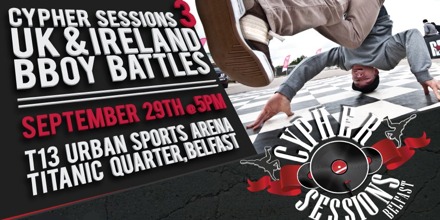 Cypher Sessions 3 b-boy battles are to return to Belfast next weekend with a new prize format and free workshops on 29 September 2012.

The solo b-boy battles competition will take place at T13 studios in the Titanic Quarter where a £1,000 prize which will be split accordingly depending on how many rounds each dancer wins throughout the day.

Called the Cypher Sessions Reward Scheme, organisers explained: “As competitive b-boys ourselves, we appreciate the dedication it takes to battle, both physically and financially. This format provides a great opportunity for b-boys and b-girls to alleviate some of the financial strains it takes travelling to and from b-boy events.”

Competitors will win money for each round in the bracketed stages of the competition: Winning the first round and quarter final rewards them with £50, increasing to £100 for the semi final and £200 for the finals.

They continued: “We believe in supporting those who support us. Plus it encourages the rawest, illest sets to be thrown down in battle!”

B-Boy Zorro, who won Cypher Sessions 2 in August 2011, will return to the event as a judge alongside B-Boy Doke and B-Boy Shadow.

Cypher Sessions 3 takes place at T13 Queens Road, Titanic Quarter, BT3 9DT. Workshops from 1pm-5pm are free, main event tickets from 5pm are £8 for adults, £5 for children and £5 for competing b-boys and b-girls.