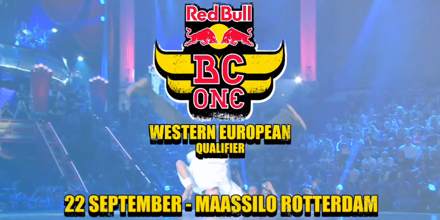 B-Boy Mounir of France is the winner of Red Bull BC One Western European qualifier that took place today in Maasilo, Rotterdamn, the last international qualifier in the preliminary series of worldwide qualifiers.

He will join the rest of the b-boys in the world finals in Rio de Janeiro in Brazil in December: The finalists at Red Bull BC One 2012 are: B-Boy Domkey, B-Boy Slav, B-Boy Klesio, B-Boy Shorty Force, B-Boy Lil Zoo and now B-Boy Mounir.

Mounir defeated Khalil, also of France in the finals after defeating B-Boy Menno in the semi finals and B-Boy Lawson in the quarter finals.

The judges were Jurskee, B-Boy Cico and B-Boy Lamine.

Winners of each battle are highlighted in bold. Battle videos will be up when available after the event – check back later for updates!