Karam Singh, also known as Kid Karam of the Trinity Warriors crew, features in the latest Robinsons Fruit Shoot advertisement. He joins a skate boarder, a diver and a yoyoer in the adverts airing this summer.

Karam of Allestree, Derby, was one of four children aged 12 and under chosen from over 5,000 across the country who auditioned in a search to be in the 2010 Juice Crew.

After impressing the 2009 Juice Crew with his video audition, voting was opened to the public on www.fruitshoot.com where Karam, skateboarder Switch Foot Schaeffer, diver Olivia The Edge and yoyoer Yo-Yo Will were chosen by the public to feature in the adverts. 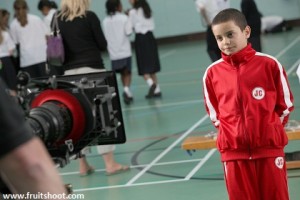 “We are so excited to be the 2010 Juice Crew” said Karam. “I couldn’t believe it when I first heard I had won alongside the other members. As soon as I met the others I knew that we would work well together, even though our skills are so different. We all bring something different to the Juice Crew and can’t wait to see the advert on TV!”

Karam, age 12, is the youngest of breakdance (b-boy) crew Trinity Warriors and has been breaking for four years. His earliest appearances in national competitions included squeezing in to a rucksack on another dancer’s back before climbing out to surprise his opponents.