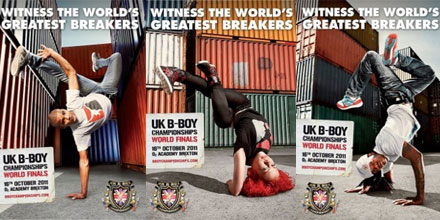 Ahead of the UK B-Boy Championships 2011 World Finals, AllStreetDance was given special access to the shooting location for the poster campaign.

“The concept is about taking over a space,” said DJ Hooch, founder and promoter of the UK B-Boy Championships. “B-boys can go wherever they want, take over any space, but it’s getting harder and harder, so this is the perfect urban, desolate area.”

UK BBoy Championships 2011 posters and behind the scenes gallery

Click any thumbnail to view the photo with description

A B-Boy Championships book, From Bronx to Brixton, was also released to coincide with the marketing campaign for the finals.