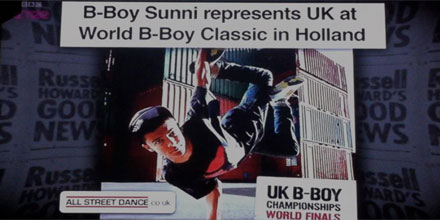 Sunni starred on the weekly ‘Mystery Guest’ section on series 6 episode 1 where Russell Howard has to guess who the guest is using props and clues.

While the headline was not related to the B-Boy Championships but rather World B-Boy Classic, a battle event in Holland, the All Street Dance logo on BBC 3 was seen in front of millions of viewers as Sunni showed Russell Howard how to breakdance. Since the show’s launch in 2009, Russell Howard’s Good News has gained an audience of 3.9 million viewers a week.

The headline the show used was in relation to B-Boy Sunni being selected to represent the UK at World B-Boy Classic.

Prior to the broadcast neither the BBC or the producers, Avalon Television, told us about the featured caption which came as a surprise to everyone on the All Street Dance team.

All Street Dance is the leading website for street dance news in the UK. Attracting over 30,000 visitors a month (March 2012), All Street Dance has been delivering dance news and industry updates on a regular basis, online since May 2010.

With a forward thinking approach to social media and digital communications in the arts, All Street Dance has over 3,000 followers on Twitter and has spearheaded the popular weekly online discussion, TweetDance.