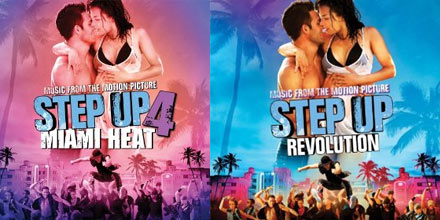 The Step Up 4: Miami Heat soundtrack is released on Monday to download or buy featuring 13 music tracks from the movie, distributed in the UK by Universal Music.

The soundtrack for Step Up 4 (also known as Step Up: Revolution in international markets) includes Hands In The Air used in the Step Up Flash Mob videos created to celebrate the forthcoming release of the movie on Sunday 12 August 2012 in the UK.

Preview tracks from the Step Up 4 OST below from Monday 30 July 2012 or buy Step Up 4 soundtrack on Amazon here.

For more information, read our story about Step Up 4: Miami Heat plot and cast.

Kathryn McCormick plays Emily, the daughter of a wealthy businessman, who arrives in Miami with aspirations of becoming a professional dancer, but soon falls in love with Sean, played by Ryan Guzman, a young man who leads a dance crew in elaborate, cutting-edge flash mobs.

The crew, called the MOB, strives to win a contest for a major sponsorship opportunity, but soon Emily’s father threatens to develop the MOB’s historic neighbourhood and displace thousands of people. Emily must band together with Sean and the MOB to turn their performance mobs into protest mobs, and risk losing their dreams to fight for a greater cause.