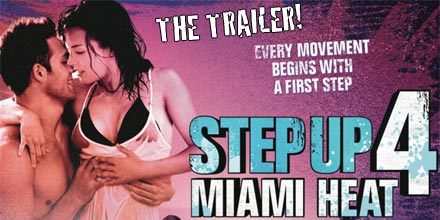 The plot synopsis for Step Up 4 Ever: Miami Heat has been announced recently detailing the actors that will be playing the major roles in the sequel to 2010’s Step Up 3D.

Ryan Guzman and Kathryn McCormick are to star in the fourth instalment of the Step Up franchise, which takes place in Miami, directed by Scott Speer.

Step Up 4: Miami Heat marks Guzman’s acting debut, who has achieved great success as a well known model, while McCormick was discovered on the American series of So You Think You Can Dance.

Check out the Step Up 4 soundtrack here!

Kathryn McCormick plays Emily, the daughter of a wealthy businessman, who arrives in Miami with aspirations of becoming a professional dancer, but soon falls in love with Sean, played by Ryan Guzman, a young man who leads a dance crew in elaborate, cutting-edge flash mobs.

The crew, called the MOB, strives to win a contest for a major sponsorship opportunity, but soon Emily’s father threatens to develop the MOB’s historic neighbourhood and displace thousands of people. Emily must band together with Sean and the MOB to turn their performance mobs into protest mobs, and risk losing their dreams to fight for a greater cause.

Jon M. Chu, the director of Step Up 2: The Streets and Step Up 3D, is executive producer alongside Offspring’s Matt Smith. The screenplay for the project is penned by Jenny Mayer.

The Step Up Franchise