The Notorious IBE organisers have announced the initial line up and programme highlights for its annual hip hop dance festival in Heerlen, Netherlands.

Update: Click here to see the winners and videos of each of the IBE events!

It will be the 12th edition of The Notorious IBE, the annual international hip hop dance festival in Holland celebrating hip hop culture on the 7, 8 and 9 September 2012 where the town of Heerlen will be taken over by b-boys, b-girls, lockers, breakers and other fans of hip hop culture for battles, workshops and parties.

Returning will be the UK B-Boy Championships 2012 European qualifiers for crew and solo b-boy battles, locking and popping; the We B*Girlz 2-on-2 b-girl qualifier battle which concludes at Battle of the Year in France; 3 v 3 generations battle, footwork battles, power move battles, kid’s battles and much more soon to be announced. 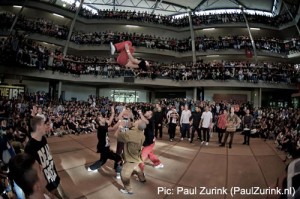 The IBE ALL Battles ALL 2012 battle: Red Bull AllStars vs Team France vs Young Gunz on – Sunday 9 September
The b-boys from the Red Bull All Stars squad, Neguin, Ronnie, Lil G, Cico, Hong 10, Lilou, Taisuke, Roxrite and Pelezinho will face Team France who have not competed since 2005, and new upcoming and talent selected from international b-boys for the third crew, Young Gunz.

IBE Block Jam – Friday 7 September
On Friday the festival will be hosting the IBE Block Jam at a car park in the centre of Heerlen f0r a Block Jam, where artists from all the elements in Hip Hop will unite and celebrate the culture together.