Organisers of Juste Debout have announced a change to battle pairings at the world finals following a new ballot system to pair up countries in a tournament structure.

The system has changed from its traditional pairing for the Juste Debout Final in Paris which fell in the same order as of the qualifiers.

Following a draw in Paris at the Retour Vers la Culture party organised by Juste Debout the pairs for the first round of the 2013 finals were chosen using a ballot process which should apply to all the dance styles.

Following the draw the winners of Juste Debout UK will battle against China and battle either Japan or Sweden should they qualify for the next bracket. 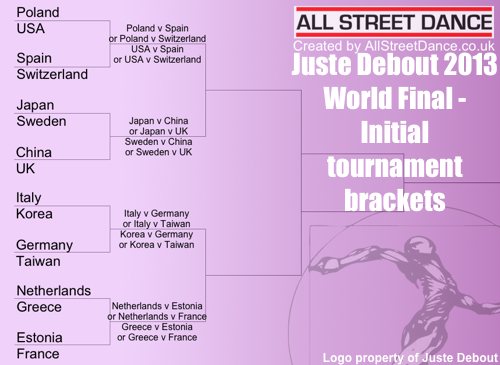 Juste Debout, or ‘just stand up,’ is an annual street dance competition for upright dance styles held in Paris in the disciplines of hip hop, experimental top rock, locking, popping and house dance.