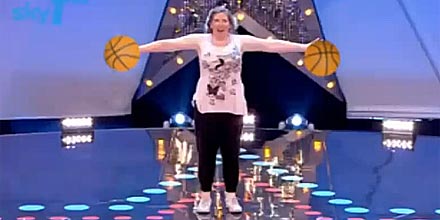 Happiness from Sky One’s Got to Dance series two has gone viral in a new wave of online video spoofs, including a basketball video mashup. Views of the original video have since passed 400,000 views.

The video is the second to appear since a ‘Happiness is death’ metal version appeared two weeks ago on YouTube.

The freestyle dancer, real name Bridgette, from Ireland, has proven a boon for Sky One and Got to Dance, making Happiness the most viewed audition from the second series so far, spawning various versions of her audition set to different styles of music and responses from fans.

Video: Happiness Got To Dance Get Loose dubstep remix
http://www.youtube.com/watch?v=1B7XizmCHUQ

Video: Happiness Got to Dance (spoof) has a rival

Happiness first appeared on episode one of the new series of Got to Dance, awarded three stars by judges Ashley Banjo, Kimberly Wyatt, and after changing his mind, Adam Garcia.

Whether she has been chosen for the live semi finals next week will be revealed this weekend.