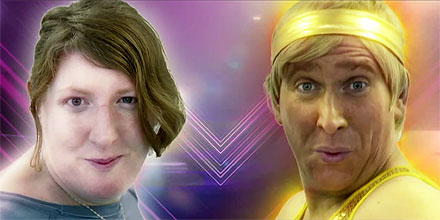 Happiness from the Sky One dance competition Got to Dance is to ‘battle’ Kevin Cruise from Britain’s Got Talent to promote Dance Central on the X-Box Kinect, hosted by Louie Spence from Pineapple Dance Studios.

A pop up space in Covent Garden’s East Piazza has been constructed for fans to watch the dance off, with prizes for the best dancers on Sunday 20 March.

Happiness, real name Bridgette, rose to the public’s recognition when her audition for Got to Dance to Scatman went viral. The accidental success was so popular Happiness was later invited back for one of the live semi final shows.

Dance Central for the Kinect accessory for the X-Box 360 was the main sponsor for Got to Dance 2011.