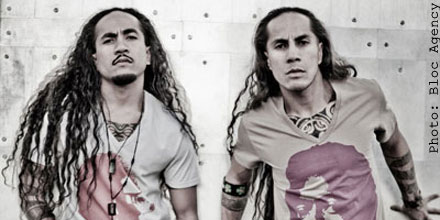 It is rumoured that Rich and Tone Talauega (real names Richmond Talauega and Anthony Talauega)  are to choreograph for Streetdance 2, AllStreetDance has learned.

Rich and Tone, who are creative directors, musicians, producers and performers, have choreographed music videos for Chris Brown, Jennifer Lopez and Madonna, as well as choreographing the final battle on Step Up 3D and directing JLS’s One Shot music video.

Previously no details about choreographers or actor and dancer appearances for the sequel had been announced, with only George Sampson tweeting hints as to who is in Streetdance 2.

It appears the film, a sequel to the 2010 UK dance movie Streetdance 3D produced by Vertigo Films, will not be including choreography from Kenrick Sandy or Kate Prince, who choreographed dance sequences in the original film with ballet choreographer Will Tuckett.

While production on Streetdance 2 is underway, no release date has been set.

About Rich and Tone

Rich and Tone were discovered by Michael Jackson’s choreographer while freestyling at a club in Oakland, California. Within a year they had become dancers and choreographers touring with Diana Ross and Michael Jackson after moving to Los Angeles. Recently, they worked on Madonna’s 2009 Sticky and Sweet Tour and directed the music video for One Shot by pop group JLS.

Their biggest projects include work for iPod, Coca-Cola, Pepsi, Gap, Mitsubishi, as well as the feature films Take the Lead, Bring It On Yet Again, and Save the Last Dance. They also received an Emmy® nomination for their work on the 2005 NAACP Image Awards and co-choreographing the feature length music video Ghosts for Michael Jackson.

In autumn 2008 they served as artistic directors and choreographers for Dancing With the Stars on US television.

Rich and Tone are represented by Bloc Agency LA