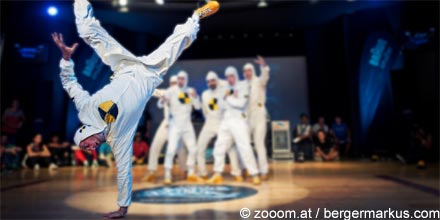 The line up for the Battle of the Year 1 vs 1 battles was announced last week ahead of the finals in Montpellier, France on Friday 18 November.

The opponents from the top 16 solo b-boys have been decided in advance and the initial knock out battle line up can be found below.

They will be judged by Karim Barouche, B-Boy Ronnie and B-Boy Taisuke.

Battle of the Year, also referred to as BOTY, is an annual international b-boying series that began in 1990.
In the past BOTY world finals were held at the Volkswagenhalle in Braunschweig, Germany until 2009 when event moved to Montpellier, France.

35 qualifiers were held around the world, seeing almost 3,000 b-boys and 350 crews competing for a place in the finals. Up to 12,000 fans are expected for the grand final.