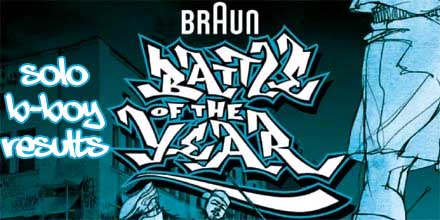 B-Boy Niek (formerly Just Do It) from Rugged Solutions, Holland is the Battle of the Year 2011 solo b-boy champion at Maison des Choeurs, Montpellier.

Niek defeated B-Boy ATN in the quarter finals to battle B-Boy Taower in the semis and eventually defeating B-Boy Viscious in the finals.

B-Boy Viscious served as a replacement for B-Boy Wing who could not compete.

Winners for the BOTY 1 vs 1 battle can be found below with the winners highlighted in bold.

Battle of the Year, also referred to as BOTY, is an annual international b-boying series that began in 1990.
In the past BOTY world finals were held at the Volkswagenhalle in Braunschweig, Germany until 2009 when event moved to Montpellier, France.

35 qualifiers were held around the world, seeing almost 3,000 b-boys and 350 crews competing for a place in the finals. Up to 12,000 fans are expected for the grand final.