The line up for the World B-Boy Classic Great Eight has been announced ahead of the event in Rotterdamn, Holland on 14 July 2012.

World B-Boy Classic is an international 2-on-2 b-boy battle that takes place annually in Rotterdam as part of the Street Science Festival in Holland where the world’s best breakers are paired together an hour before the battle.

World BBoy Classic was established in 2009 by the Rotterdam-based organisation 45 Live who are behind the events The Notorious IBE and Dutch BBoy Championships. The festival also includes battles in other dance styles, workshops, markets, performances, panels and parties

The World B-Boy Classic 2011 champions were Hurricane Ray and El Nino. B-Boy Sunni was selected to represent UK, and while he was knocked out ahead of the finals, BBC3 comedy show Russell Howard’s Good News picked up on a headline that appeared on All Street Dance. 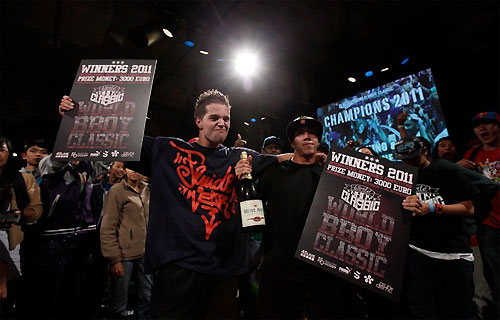 More information on World B-Boy Classic can be found at www.worldbboyclassic.com