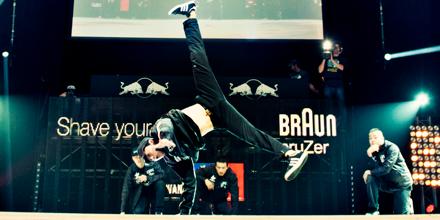 The b-boy crew line up for the Braun Battle of the Year (BOTY) 2012 has been announced ahead of the world finals in France this month.

Battle of the Year world finals will return to the Park and Suites Arena in Montpellier, France, on 17 November 2012 with qualified international crews from around the world and host the solo b-boy and We B*Girlz battles as well as workshops, parties and performances in the lead up to the finals.

After Battle of the Year’s plans to invest in the African b-boy scene earlier this year, two crews from Africa will have their own Battle of the Year event three days before the final in Montpellier which will complete the line up on Saturday, below.

Battle of the Year has also changed its format from previous years in favour of a temporary new battle formula: Six crews will now qualify for the final battles, not four. The two crews with the highest show rankings will go directly to the semi-finals while the other four crews will battle in the quarter-finals for the remaining two spots in the semis. The organisers will review the system after the finals and adopt it based upon its success.

Braun Battle of the Year BOTY 2012 bboy crew line up

DJs
Panic (Holland) One Up (Japan)