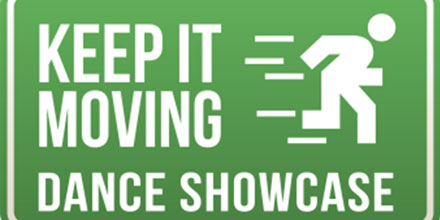 The line up for Keep It Moving, the annual dance showcase at Croydon Fairfield Halls produced by The Movement Factory was announced recently ahead of the show on Sunday 16 December.

Keep It Moving 2012 will include guest performances from Turbo and Belle Fisher from Got to Dance on Sky One and Britain’s Got Talent finalists Peridot.

The evening will be hosted by comedian Eddie Kadi and singer Dionne Reid.

The Movement Factory is an umbrella organisation created to house various dance programmes and initiatives of Bruk Out, a company started by Leanne Pero when she was 15 years old organising dance events in her bedroom in Peckham, South London.

Later in 2011, following mentoring from Pineapple Dance Studios founder Debbie Moore OBE to launch its Hip Hop Skool the company underwent a rebrand from Bruk Out to The Movement Factory, a mentorship which continues regularly to this day.

In the past year Leanne Pero became an Olympic Torchbearer, was nominated as ‘one to watch’ on the prestigious Management Today ’35 under 35′ list, and has been shortlisted for a Women of the Future Award.

#Belle #Croydon Fairfield Halls #Get It On The Floor #Keep It Moving #Leanne Pero #Peridot dance #Turbo
Previous Post
Got to Dance 2013: List of all dancers and groups on series 4
Next Post
BBoy Mounir Red Bull BC One 2012 Winner – Results and video