BBoy Mounir Red Bull BC One 2012 Winner – Results and video 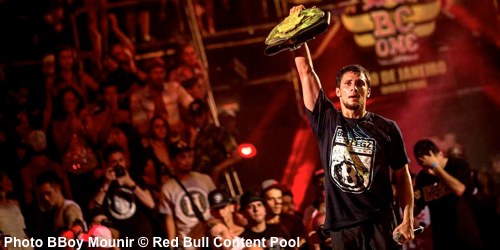 BBoy Mounir from France is Red Bull BC One 2012 winner after being crowned world champion in Rio de Janeiro, Brazil, tonight.

He defeated B-Boy Klesio in the quarter finals to face B-Boy Junior in the semi finals, where he then went on to battle B-Boy Differ in the finals.

Mounir as champion marks a successful year for him after qualifying for the world finals at the Red Bull BC One 2012 Western Europe qualifier (results) and victories with his crew, Vagabond Crew, who recently emerged as Battle of the Year 2012 champions in Montpellier, France, last month.

The course of the battles saw Red Bull BC One 2011 champion, RoxRite defeated in the quarter finals against Differ of Korea, while the semi finals saw a French derby between Junior and Mounir battling for a place in the final.

Full results breakdown detailing each b-boy’s progress for the world finals can be found below.