Production of the UK B-Boy Championships 2010 artwork is underway ahead of the finals in October.

As illustrated in our photos, the pre-visualisations show a panoramic shot of four street battles surrounded by hundreds of people. Each of the main battles will also feature on a series of posters following 2009’s promotion which ran with four different flyers.

The panorama borrows the style of avant garde war paintings which often included images of several battles taking place in the foreground with other smaller battles taking place in the background. In the style of ‘the great battle,’ the finished artwork will also include national flags flying, representing the crew nationalities in the competition. 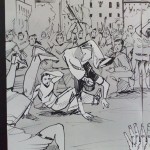 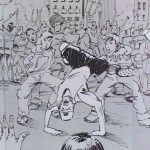 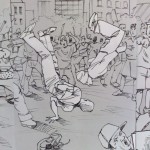 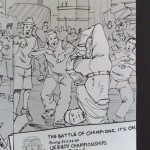 The pre-visual artwork was used as a guide to render the early version of the UK B-Boy Championships poster, which features Brooke Milliner, B-Girl Roxy and two other breakers. Also present at the photoshoot was Plague, Soul Mavericks, and La Familia who will feature in crowd shots.

The creative for the UK B-Boy Championships is expected to take around a week to complete.

You can also read about the photoshoot on the TooMuchFlavour blog.