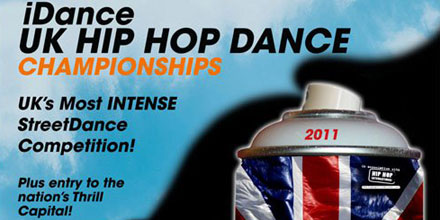 The iDance® UK Hip Hop Dance Championships started this weekend with the first of its regional qualifiers in the Midlands and the South.

Over the coming weeks dancers from the UK will begin their battle to claim the title of UK Champions.

Yesterday started with an open jam,workshops and showcases from judges including Turbo (Issac Baptiste) from Got To Dance on Sky One at Bournemouth Pavillion, while at The Drum, Birmingham dancers were also given the chance to win tickets to see hip hop group Slum Village in concert.

The iDance UK Hip Hop Championships grand final takes place on 4 and 5 June at Thorpe Park, where winners from the regional events will compete against each other for the grand prize: to represent their country at the World Hip Hop Dance Championships in August 2011.

This year the judging panel for the UK finals includes Shabba Doo, star of the movie Breakin‘.

Members of the top UK crew will have their flights paid to go Las Vegas this summer to represent the UK.

Omar Paloma, founder of iDance said: “For the past two years, iDance has seen some of the best hip hop and street dance crews from across the UK compete for a lucrative spot at the World Hip Hop Championships. The competition is only going to get tougher as we see the boundaries of this dance genre being pushed to their limits and beyond.”

Previous winners of iDance include Plague who won the world championships in America; Flawless, who became finalists on Britain’s Got Talent competition in 2009; Peridot (BBC3’s Move Like Michael Jackson, Britain’s Got Talent); Jukebox and DNA (featured dance groups on Sky 1’s Got to Dance).

He continued: “The UK has some exceptional dance talent and we’re looking forward to sending the winners to represent us and show the world of street dance exactly what the UK is made of.”

Details of regional iDance qualifiers can be found here.